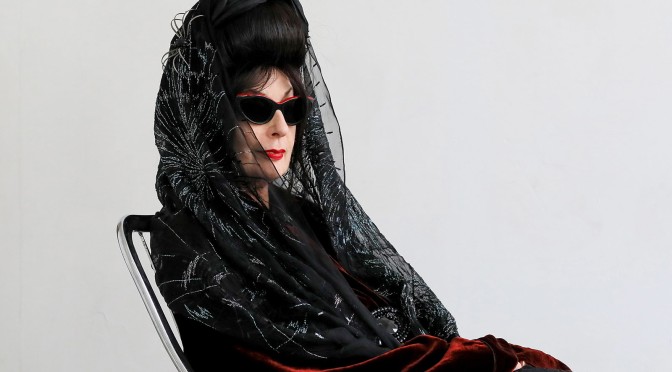 Diane Pernet is a Paris-based American-born international fashion blogger, critic and founder of the international ASVOFF (A Shaded View on Fashion Film) festival.

She became a New York City fashion designer in the 1980s and she maintained a label of her own for 13 years. She relocated to Paris in the 1990s where she got her first job as a costume designer for director Amos Gitai and his film Golem, l’Esprit d’Exile. Pernet also worked for the CBC’s Fashion File which led to an appointment at Hong Kong Joyce Magazine, where she was the fashion editor for five years.

In the late ’90s, Diane took on a “Dr. Diane” fashion-advice column at ELLE.

Her brainchild ASVOFF showcased for the first time in September 2008, with fashion films as a centerpiece and from that point it developed into a yearly travelling international event with satellite conferences, performances and exhibitions.

Recently, she commenced a collaboration with a Greek film director Konstantinos Menelaou.

What forms of art do you admire and how do you define art?

My appreciation for art is quite diverse. Most recently I was moved by The Sleeping Chapter by a young French artist, Théo Mercier has often been called the Prince of Contemporary Art. His exhibition is currently at la Conciergerie in Paris. Imagine for a moment that Théo Mercier spent the last five weeks practically living in la Conciergerie working with tons of sand and creating this dreamscape, all that work can never be moved to another space, it is made from sand so when the exhibition is over, in a truly eco-friendly way, the sand will be returned to where it came from, and all this magic will just disappear.

For me what counts the most is that the artwork passes an emotion, makes me think, it could be disturbing like Anish Kapoor’s blood paintings. The blood-red installations could evoke nightmares, but the thing is they do evoke something visceral.

Johan Creten is a Flemish sculptor based in Paris that works a lot with ceramics and bronze. His pieces are sensual and often sexual; recently, many are dusted with gold. I like photographers such as Daido Moriyama, I consider photography like art and appreciate his sensual, haunting night photography.

What’s your source of inspiration?

Nothing and everything. I love feeding on art exhibitions, films and life in general.

As a former fashion designer do you believe that fashion plays an important role in our lives? Do we all have our distinctive style?

I think even the most ‘non-fashion’ person puts consideration into what they wear. I remember living with an old boyfriend ages ago, he was an artist and a photographer and totally against fashion thinking it was very superficial, yet he took great care in what he wore even if it was almost like an institutional workwear. So, I think fashion plays an important role in our lives. Some dress in labels to show the inside of their wallets and some dress to belong to a tribe like for instance the tribe of Rick Owens or Demna. Some, and they are very few, have their own distinctive style and at this point, one must define the difference between fashion and style in the most basic of terms. As I see it one buys fashion, and it has a sellout date, but style is forever and doesn’t necessarily have to cost much.

You have an individualistic style, is this your genuine personality and what each piece of your ensemble represents?

I don’t know that I give a meaning to every article I wear but yes, it expresses my personality and if I must give a meaning it is to instill a bit of distance. On the one hand I am very warm and open as a person but by wearing dark glasses and a veil I am not encouraging people to come too close. Not at all into hugging but more Japanese in the sense that warmth is not necessarily expressed by the distance between two people. I rather liked the fact that during COVID there was no kissing or hugging. I mean save that for the ones you are really close to not for the public.

What’s the uniqueness of documentary filmmaking in comparison with the other genres of filmmaking?

I’ve always felt that life is stranger than fiction. Look at the world right now, Stanley Kubrick could not have created anything even close to Donald Trump, Dr. Strangelove was nothing compared to the surrealism in his public life. In the current edition of ASVOFF we are focusing on interesting documentaries like Bruce Weber on the Italian photographer Paolo di Paolo who took the most amazing reportage photographs but when the newspaper he worked for closed he did not lift his camera for 50 years and his own daughter had no idea what a brilliant photographer her father was. At the age of 95 when he’d not taken photos for 50 years Pier Paolo from Valentino contacted him to take backstage photos at his couture show and the story of his life was told in a poetic and emotionally moving way. More than ever I think people born around the 90’s have a hunger for what went on before them and that has been captured in films like Kingdom of Dreams Part one and two which cover the golden years of fashion, or a documentary on Azzedine Alaia A French Couturier by Olivier Nicklaus or a film on Sisters with Transistors tracing the women in electronic music through the ages or a film on Guy Bourdin the epic photographer are all really immersive and it is like reading an autobiography of someone you admire but set to emotion and with the elements of the image and sound a personal entry into a world that you would not ordinarily be prive too.

What made you take the decision to leave New York City for Paris? How open did you find Paris?

New York in the end of 1990 was like Blade Runner in the worst of ways, 80% of my neighborhood was dead or dying from AIDS, the homeless situation was out of control, drugs were rampant as was crime and as a fashion designer, which is what I was at that time, this just was not inspiring. I thought about leaving for at least 4 years before I took the leap across the ocean with no strategy and no plan other than I could not stand living in New York anymore. As for Paris being open…absolutely not. In New York, the NYC that I knew, we embraced foreigners, in Paris, they repel them. It was tough the first three years, but I was determined to stick it out. Thirty-two years later I am still here.

What is the story behind the creation of ASVOFF and its merging forms of art?

I studied film, that is what I got my degree in all those decades ago, I had my own brand as a fashion designer in New York for 13 years and in between I worked a little bit as a costume designer for films and understood that there was a fear of fashion for most directors and by putting together ASVOFF, the first festival actually was in 2006 and it was called You Wear it Well, I wanted to show how one supports the other so in a way it was joining a circle, a circle that was my life experience. I like to support fashion designers and filmmakers but more than anything what ASVOFF really is, it is a cultural event: fashion, culture, film. It is not about advertising or celebrity, it is about creation.

Do you think that new talents  find it difficult to emerge today?

Not any more than before in fact with social media it is much easier to be present no matter where you live.

What are some of your collaborations that you’re proud of?

By collaborations you mean people involved in ASVOFF? I loved paying tribute to Alejandro Jodorowsky, that was a dream come true, same for William Klein, I am happy to say I gave the talented Woodkid his first concert in Paris and look at him now. Seven years at Centre Pompidou was a most gratifying experience and now for the past two years with Adrian Joffe at 35/37 the cultural arm of Comme des Garcons has been a joy. I’ve had wonderful presidents like Jean Paul Gaultier, Dries Van Noten, Rick Owens, Michele Lamy, ORLAN, and now with Caroline de Maigret and my President of Honor Jean Charles de Castelbajac. We will pay tribute to him this year for the volume of work he has contributed to in the fields of art, fashion, and design.

Can you disclose some of your future plans?

A documentary is about to begin…let’s see where that goes, Konstantinos Menelaou, a film director living in Athens has been working on getting this off the ground. If anyone out there is interested in investing in this project, do let your voices be heard…We are starting a membership to ASVOFF via the creation of a limited number of NFT’s. With every edition of ASVOFF we expand a little more. This edition there are 6 external curators. I give a theme and choose the curator for that theme and then the rest is up to them to choose their own jury and curate the films in their individual categories. We are looking forward to doing something in Japan next May and who knows what else is in store…just keep going forward as long as I can.

We empower you to empower the world

Art Towards a Happy Day